Musician Enrico Bertelli shows in a live stage performance how the LEAP can be used to create awesome sounds and get together with real drums midi and snares. His augmented hybrid instrument consists of different parts – analog, digital – and also two tennis rackets.

Musician Enrico Bertelli: “This performance is the result of an autobiographical reflection on the design and performance practice of an augmented hybrid instrument. Created with a MakeyMakey board, its core design principle is to substitute the complex, synthetic appearance of a MIDI drum kit with a visually appealing arrangement of small commonplace objects.

The snare’s head is drawn with conductive ink and, well rested at the top of the instrument, lies a LeapMotion for that extra expressiveness.
The instrument’s palette is expanded by the performer’s addition of imaginary instruments. Undefined in shape and freely hanging in space, they provide the audience with indeterminate performative elements open for interpretation in the sonic performance.

The instrument’s simple, recognisable construction narrows the distance between performer and audience, while highlighting the fascinating action-reaction element of live performance.
This is the live video of the performance on August 8th 2013 at the Barbican Centre, London – part of Hack the Barbican.
It’s just a shame that you cannot see the two tennis rackets I modified as kick drum pedals!!” 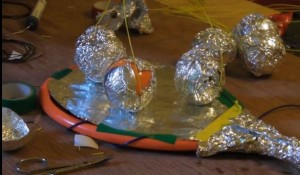