erminmusic uses the monome with the LEAP Motion and creates nice sounds. The monome is a new device that gives you a tactile and visual feedback while playing.

erminmusic : beginning the integration of leap motion with the monome..

About the monome (from their webite):

the primary features of monome devices are tactile and visual feedback. the decoupled design allows for clear response and intuitive play. when you push a key or 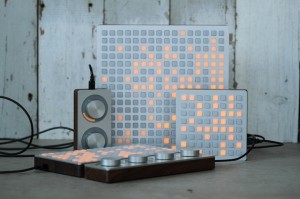 turn an encoder the input data is sent to the computer for various forms of interpretation while the output data, light patterns for example, are controlled separately in response. all decision making is controlled by the chosen application running on the computer.