musiqelab: Three composers performed at U::Gen Laboratrium live concert series. This video is a digest version of the concert. 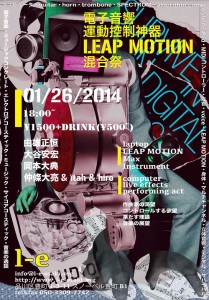 It would be their own composition and performance using LEAP MOTION of 3D device. The idea with a focus on to explore the possibility of LEAP Motion is proposed. We hope that the LEAP Motion is hidden the power to transform the paradigm of musical expression as it is with the controller is a new musical instrument. Almost movement data of the hands would be sent to Cycling’74 Max6 from LEAP MOTION as various kinds of musical expression. The sounds are generated on real time.
U :: Gen Laboratrium will be held every other month. eleclab.tumblr.com
Yasuhiro Otani
cooperation by Japanese Society of Electronic Music