Blue Estate is the latest game added to Leap Motion’s Airspace. 100% compatible game with LEAP Motion.  It’s available for (free) PC only at the moment and uses the Unreal Engine. The creators of the game based on comicbooks from Viktor Kalvachev, tried to get the best fluent gameplay result possible using the LEAP Motion.  A reason to make a post about it.

Quite nice and detailed visual and sound impressions.

It’s the first LEAP Motion game with unreal engine support (pls correct me if I am wrong) and also the first game Not suitable for minors.

You can get your own impressions:

At the moment you can get Blue Estate for free at Airspace for a limited time (ends oct. 25th 2013 ). 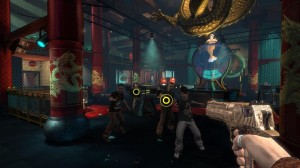 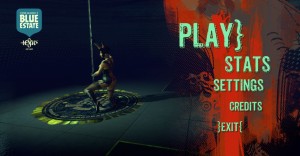 About Blue Estate – The Game

Blue Estate is a darkly funny rail shooter game based on the Eisner Awards-nominated Blue Estate comic books from Viktor Kalvachev and developed by HESAW. The Blue Estate game for PC offers slick wit and punishing violence, all set in an eye-popping technicolor mob world.

The Prologue introduces you to the first two levels of the game as the belligerent Tony Luciano looking to find Cherry Popz, who was abducted by the Sik Brothers gang. Experience the smoothness of motion control in a rail shooter as you fight for Tony’s life with only one finger against the most absurd and dangerous obstacles. The prologue takes you through a burlesque show, a steam bath, secret doors and dangerous mops. An uncooperative hairstyle adds a visual challenge that might just get Tony killed a dozen times over by the crashing waves of bullets and swords between him and survival.

– Blue Estate, the comic book, is set in a black humor mobster parody
– Optimized gameplay for the Leap Motion Controller.
– Play with numerous weapons, including melee attack.
– Use the environment to protect yourself, break it to uncover enemies.
– Meet a memorable end level boss.
– A fun scoring system that tracks your efficiency.
– Enjoy the immersion powered by Unreal Engine Technology.

For more information about Blue Estate the game, go tohttp://www.blueestatethegame.com.